Dr. Glyn Wittwer (right) was previously best known as a specialist in the international wine market, but since joining the Centre of Policy Studies he and other CoPS staff have used variants of the TERM CGE model to analyse water shortage and trading in the Murray-Darling basin. TERM (The Enormous Regional Model) is a "bottom-up" CGE model of Australia which treats each region as a separate economy. It is further described here. The key feature of TERM, in comparison to predecessors such as MMRF, is its ability to handle a greater number of regions or sectors. The most recent TERM master database represents 172 sectors in 206 statistical sub-divisions (SSDs), allowing the model to accurately represent water catchment, major urban or tourism regions. Glyn and others have added a detailed treatment of farm water use to create the specialized TERM-H2O model, which focusses on water-related issues.

TERM-H2O and related work is described in a new book, Economic Modeling of Water: The Australian CGE Experience, edited by Dr. Wittwer, which will be published by Springer in April 2012. More details here.

A February 2011 article in The Age newspaper reported that: "Contrary to the farm lobby's pessimism, economic modelling predicts that federal government water buybacks will deliver a small boost to economic activity across the southern Murray-Darling Basin." Read the article here. The modelling was performed using TERMH2O. 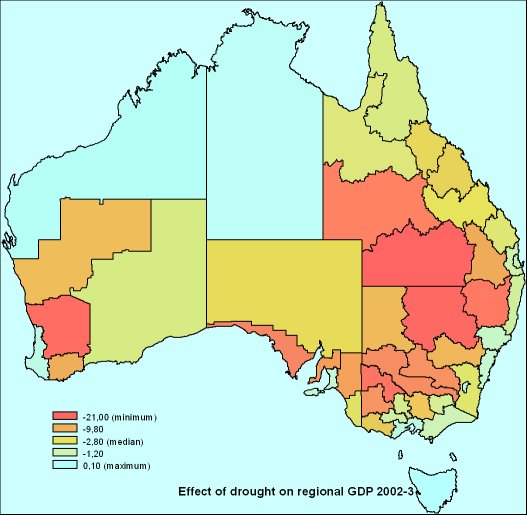 Some results from the 2005 version of TERM